skip to main | skip to sidebar

Squares as sums of cubes 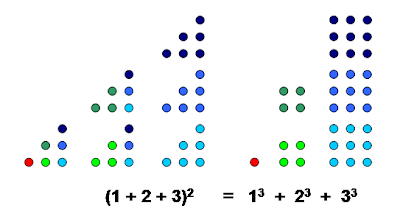 In 1988, on the way home from my first visit to the Alhambra, I noticed some interesting tiles in a coffee shop in the Madrid airport. The pattern on the wall appeared to be random meanderings, but there was only a single type of tile. That tile, the unit cell, had four lines on it, each the same thickness and each connecting with the edge at the same point, so that no matter how two adjacent tiles were placed the lines would appear to cross the edge into the adjacent tile. With the tiles arranged randomly, the effect was to produce meandering lines: 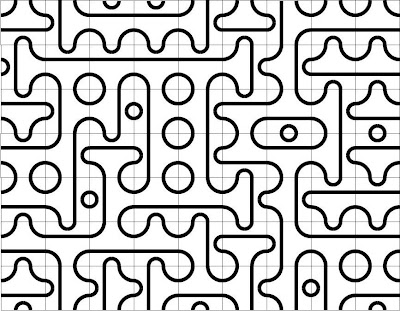 From time to time my thoughts have come back to this pattern. It poses many interesting questions. If all of the tiles have the same orientation, then the pattern is boring and the lines are infinitely long: 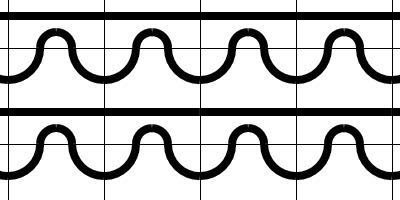 If the tiles are arranged randomly, then what is the expected distribution of lengths? Each line (like the two colored lines below), either forms a closed circuit or goes on forever. Would a plane tiled to infinity with randomly oriented Madrid tiles have any lines that go on forever? I don't know. On the one hand, the chances of every such line ultimately closing back on itself seems remote (How could every line be guaranteed to "find" itself?). But the alternative, that it would go on forever, also seems unlikely if you think about the how many such infinite lines there would be, and whether they would all lie in roughly the same orientation. Lines cannot cross, so all of them would have to run in the same direction, but the symmetry of the situation seems to make that unlikely (since any one line is equally likely to run up-to-down as left-to-right). I'm stymied. Does anyone know the answer to this? 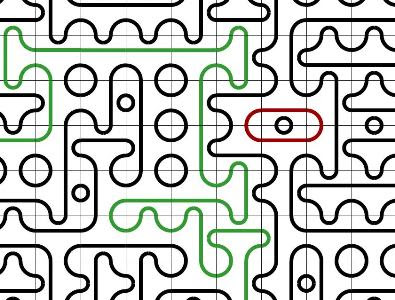 I will be returning to these Madrid tiles again.
Posted by Steve at 6:15 AM No comments: 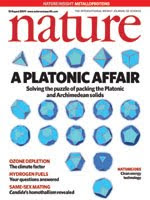 A recent issue of Nature (Aug. 13) includes a conjecture of fundamental importance in geometry. Torquato and Jiao conjecture that "the densest packing of the Platonic and Archimedean solids with central symmetry are given by their corresponding densest lattice packings." In plain language, this means that for most of these solids (those that remain unchanged when rotated about their central point, which is all but the tetrahedron) the most compact arrangement of in space is a regular repeat, where each particle (solid) is arranged in the same orientation. This is analogous to the situation with spheres, in which case Johannes Kepler proposed in 1611 that one could not do better than to pack them "in the same way that grocers stack oranges or melons." This conjecture took almost 400 years to be proved, and that story is the subject of a popular book, "Kepler's Conjecture," by George G. Szpiro.

What Torquato and Jiao did was to seek the densest packing for each of the solids by computational modeling of their positions in space. You can read the paper for details, but I think of it as virtual shaking of a virtual box to maximize "settling of contents." Their trick was to allow deformation of the fundamental cell shape. What they observed was that for all of those solids with central symmetry, the densest packing was a lattice packing. Their conjecture is that this is a general truth, one that can be proved, in the mathematical sense. I have no doubt about the power of their method. They achieved higher densities than were previously known for many of these solids, and it seems very unlikely that something that is generally true from their results and so intrinsically appealing could be wrong, but mathematical proof is something else entirely. Let me quote Szpiro on the difference between conjecture and proof (pg. 7):

"This is the best way to stack melons. In other words, it is the densest packing. Market vendors know it, you and I know it, and Harriot and Kepler knew it, but mathematicians refused to believe it. And it took 387 years to convince them of this fact." Torquato and Jiao have now proposed something quite elegant that nobody knew before. It is tempting to think that this conjecture is somehow connected to a deeper truth and will one day not only be proved, but will play a central role in a deeper theory of symmetry. 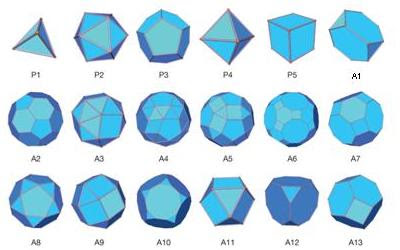 This figure (which is a corrected version of Fig. 1 from the Torquato and Jiao paper) shows the five Platonic and 13 Archimedean solids.
Posted by Steve at 3:30 PM No comments:

A recent issue of Science announced the discovery of natural quasicrystals, solids whose atomic arrangements have symmetries that are forbidden for periodic crystals. In this case, Bindi et al. (Vol. 324. no. 5932, pp. 1306 - 1309) describe a naturally occurring icosahedral quasicrystal that includes "six distinct fivefold symmetry axes." This is big news! The picture here is their Figure 4A. I like it because it clearly shows 10-fold symmetry very close to the center (which means that 10-fold symmetry extends fairly far in the actual quasicrystal). 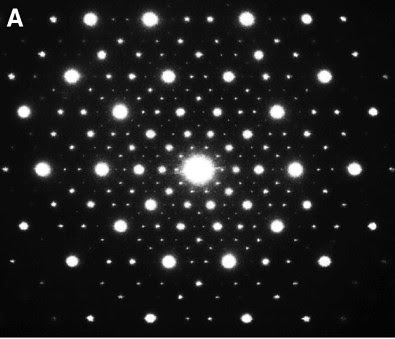 Explorations of five-fold symmetry on the plane go back to Persian artists of the twelfth century. I became aware of this when I read Critchow ("Islamic Patterns" 1976), which presents "demonstrations" of "important shapes that enable the five-fold symmetry to harmonize with the necessary repeats of a two-dimensional surface." The matter of Islamic quasicrystalline tilings was taken up in detail by Lu and Steinhardt (who are also authors on this new paper) in 2007 ("Decagonal and Quasi-Crystalline Tilings in Medieval Islamic Architecture"). However, it was only in the 1970s that Penrose tilings, a periodic but infinite tilings with fivefold symmetry, were described. 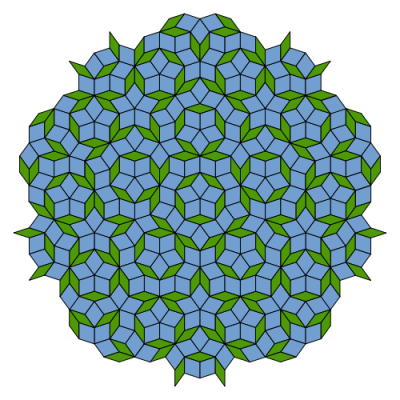 This is a Penrose tiling showing five-fold symmetry.

More recently, the production of quasicrystals in the laboratory has become something of a cottage industry, but only now have naturally occurring quasicrystals been found.

Most of what I might say is said better in article, so I encourage interested readers to read the original.
Posted by Steve at 11:40 AM No comments:

The dual of buckeminsterfullerene and other thoughts about polyhedra

I've been thinking about polyhedra, and I have to thank those who wrote the Wikipedia article Polyhedron for giving me more to think about. The pentakis dodecahedron consists of 60 isosceles triangles joined at 32 vertices (12 five-folds and 20 six-folds). You can view and rotate a three-dimensional version at polyhedra.org. Technically, this is a Catalan solid. The Catalan solids are the duals of the Archimedean solids, which are semi-regular convex polyhedra composed of two or more types of regular polygons meeting in identical vertices. Catalan solids therefore have one type of polygon but two or more types of vertices. This particular polyhedron is the dual of the truncated icosahedron, or buckyball.

Left to right:
1) Buckministerfullerine (a buckyball). The shape is known a truncated icosahedron, which is a type of Archimedean solid. This is the structure of carbon-60, which is your basic fullerene.
2) An eicosahedron nested inside of a dodecahedron. These two Platonic solids are duals. The image is from the banner of the web page for the Dept. of Chemistry and Biochemistry at the University of Maryland.
3) A soccer ball.

Steve
I'm a geneticist at the University of Maryland. I teach genetics. My research uses model organisms and bioinformatics to study signals for the splicing of precursors to messenger RNA. All recent posts are listed at ongen.us/SMM-Posts.